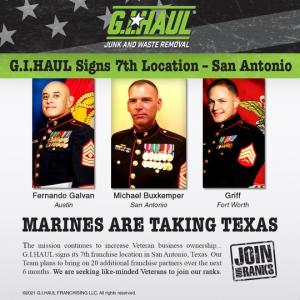 PITTSBURGH, PENNSYLVANIA, UNITED STATES, June 30, 2021 /EINPresswire.com/ — G.I.HAUL® Junk and Waste Removal, a Pittsburgh-based and veteran-owned and operated company, has continued its rapid expansion across the country and has signed their seventh franchise. San Antonio will be added to existing franchises in Pittsburgh, Cincinnati, Atlanta, Tampa, Austin, and Fort Worth. That also marks the third location in Texas, all of which are owned and operated by former Marines.

When asked about why he believes G.I.HAUL® has seen continued success throughout the United States, founder and former Marine David McCloskey stated "We're giving veterans a chance. A chance that no one else will give them. That's our mission and will always be our mission. We want to increase veteran business ownership."

And what does the future hold? Does the veteran-owned and operated junk removal company expect to see the pace of expansion slow down at some point? "Actually, from what we are seeing and from the conversations we're having, we expect it to pick up. Our conservative estimates have us in 20 additional markets in the next 6 months," David said. That's not bad for a company that started with just a truck and some trash.

To learn more about G.I.HAUL® Junk and Waste Removal, go to www.gihaul.com/franchise.

About G.I.HAUL® Junk and Waste Removal

G.I.HAUL® Junk and Waste Removal is a veteran-owned and operated junk removal company. The company began in 2007 in Pittsburgh as Major Deeds Hauling and has been on a mission ever since to provide veterans with an opportunity following their service. G.I.HAUL® has been featured and recognized both locally and nationally having appeared on A&E’s hit show “Hoarders” and being the recent recipient of Citizens Bank’s Small Business Community Champion Award. G.I.HAUL® currently operates in 6 metro areas throughout the US (Pittsburgh, Atlanta, Austin, Cincinnati, Fort Worth, Tampa Bay) and is looking to continue to expand its mission. To learn more about their mission and franchising, visit www.gihaul.com/franchise.