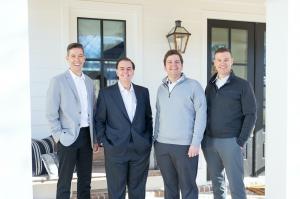 Representing the Chatham Family of Businesses, from left to right: Myles, David, Lance and Gabe Chatham

ALPHARETTA, GA, UNITED STATES, March 1, 2021 /EINPresswire.com/ — Chathambilt Homes has received the industry’s prestigious Southern Living Custom Home Builder of the Year Award which was presented at the annual Southern Living Home Summit on February 23-24. This is the first time a Georgia homebuilder has received this coveted distinction.

“My Dad, Howard, would have turned 100 this year and would have been so proud to see what his company and family have accomplished since his founding of the company in 1948,” said David Chatham, president of Chathambilt Homes.

Chathambilt is also a founding member of the Southern Living Custom Builder mentoring program which was established to drive diversity in the custom home building industry by providing opportunities and support to college students. The partnership is highlighted in the March issue of Southern Living.

“Baxley is a gated community featuring seven custom luxury homes designed to maximize life in downtown Alpharetta,” said Myles Chatham, director of marketing for the Chatham family of businesses. “We are working closely with award-winning designers to create meaningful designs for today’s homeowners in live, work and play communities and provide the legendary craftsmanship that defines a Chathambilt Home.”

Now in its third generation, Chathambilt Homes has built more than 5,500 luxury estates and developed more than 150 neighborhoods in north metro Atlanta.

In 2020 the Chatham family of businesses received a significant number of accolades for its long-standing commitment to quality.

“We are honored to be recognized for excellence across our family of businesses,” said Gabe Chatham, “and very proud of the recent Greater Atlanta Home Builders Association’s (GAHBA) OBIE Award for Best New Home.” Gabe Chatham served as 2020 president of the GAHBA and led the organization through an especially challenging but rewarding year.

Other top industry awards include the Atlanta Parade of Homes’ Best Kitchen and Modern Luxury Magazine’s Best Homebuilder. In addition, Gabe was named to the prestigious Who’s Who in Residential Real Estate by the Atlanta Business Chronicle and the company was a frequent contributor to Atlanta’s Best New Homes TV show and Atlanta Building News.

At the close of 2020, David Chatham, president of Chatham Neighborhoods and visionary of the Chatham Family of Businesses, who served on CoreLogic’s board of directors as well as its predecessor firm, First American Corporation, stepped down after 31 years of service. In recognition of his talent and continued commitment to the industry, David was recently appointed Life Director of the GAHBA.

About Chatham Family of Businesses:
For more than 70 years, the Chatham family of businesses have been built on the principles of hard work and integrity. Now in its third generation, the legacy homebuilding brand is renowned for the unwavering passion for excellence and craftsmanship that has defined it since 1948. The most awarded residential contractor in north Atlanta, this Southern Living Custom Builder has received five Southern Living Cornerstone Awards, numerous Atlanta family business awards and hundreds of additional titles and accolades. Included in Chatham’s family of businesses are Chatham Neighborhoods, a real estate developer with an emphasis on developing luxury neighborhoods throughout metro Atlanta, Chathambilt Homes, a luxury custom home builder recognized for meticulous craftsmanship and timeless design, and The Chatham Company, a team of licensed realtors who help clients buy and sell real estate through its partnership with Keller Williams. For more information, visit http://chathamlegacy.com/