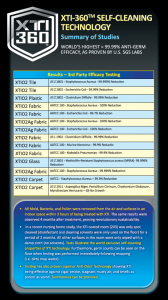 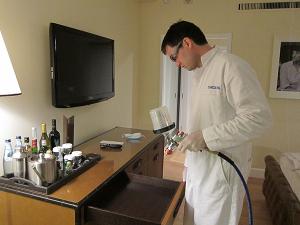 It’s essential we form partnerships with companies like XTI-360™ [American CleanCoating Company] and increase employee and consumer confidence, and understand that it’s science-based, and it works”
— Dr. Gavin Macgregor-Skinner, Director of GBAC

XTI-360™ with Active-Shield is the world’s first and only safe, proven, and continuously germ-killing coating that can deliver over 99.9% efficacy (independently confirmed by SGS laboratories) without the use of a bonding agent. XTI-360™ can be applied quickly to virtually any type of surface, and it works continuously for at least one year, after one treatment. In addition to building surfaces, XTI-360™ can be used to protect furniture, carpeting, fixtures and various consumer items (computer keyboards, cell phones, tablets, TV remotes, pens, etc.) from becoming sources of contact transmission.

XTI-360™ breaks down and vaporizes virus and bacteria germs, and other harmful pathogens, and eliminates odors, 24/7, even in the dark. Unlike coatings that mechanically pierce virus germs, XTI-360™ leaves no residue from virus germs that can turn toxic over time. XTI-360™ germ-killing nanoparticles “recharge” when exposed to light (sunlight or artificial), making XTI-360™ with Active-Shield the first and only long-term, self-cleaning, binderless coating, providing laboratory proven, continuous protection, 24 hours a day, 7 days a week.

The Global Biorisk Advisory Council® (GBAC) helps organizations and businesses prepare for, respond to, and recover from biological threats, and biohazard situations and real-time crises. GBAC offers education, training, certification, response management, and crisis consulting for situations where environments require a much higher level of cleaning, disinfection, and restoration. GBAC is a division of ISSA, the worldwide cleaning industry association. Members of ISSA have access to discounts on GBAC programs and services.

When asked what places or things should be at the front of the line for XTI-360™ coating, Hartstone said, “We decided that XTI-360™ would do the very most good on face masks, so we have opened a mask production line to make StaClean™, XTI-360™ coated face masks here in the U.S.A. We’ll be producing StaClean™ face masks at the rate of 2 million a month starting in February, and we’re taking orders now.”

Hartstone said that he’d next suggest, “The White House, the Capitol and the Supreme Court because we should be most concerned about protecting the continuity of our Federal government. Then, we’d suggest where people, especially infected people, most heavily congregate,” Hartstone said, “including, hospitals, nursing homes, hotels, schools, planes, trains, subways, ships, sports and entertainment venues, restaurants and clubs; all the places we know have high concentrations of people to spread germs."

“We are looking forward to our partnership with GBAC as we increase the recognition of both XTI-360 and the GBAC Star Accreditation program,” says Hartstone.

To learn more about XTI-360™, visit https://xti-360.com. For more information or for media inquiries, please contact Emily Hartstone at emily@xti-360.com.

The Science Behind XTI-360