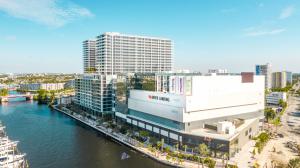 The 8.14-acre mixed-use River Landing Shops & Residences welcomes its first tenants, with others opening later in 2020 or early 2021

From the beginning, we envisioned a vibrant and dynamic development that would unlock the city’s riverfront culture for all of Miami”
— Coralee Penabad, Co-Principal of Urban-X Group in Miami

MIAMI, FLORIDA, UNITED STATES, September 11, 2020 /EINPresswire.com/ — Canada-based H&R Real Estate Investment Trust is pleased to announce the opening of River Landing Shops & Residences, one of Miami’s most anticipated waterfront mixed-use developments on the Miami River. River Landing, which has transformed the city’s riverfront west of downtown Miami, is set to officially open to the public in September with the welcoming of Hobby Lobby, Burlington Stores, Publix Supermarkets, Five Below, Chase Bank, and AT&T as its first tenants to open.

“The opening of River Landing Shops & Residences is a milestone occasion for H&R REIT as our first ground-up development in Miami,” said Tom Hofstedter, President & CEO of H&R REIT, owner of River Landing. “ Opening with nearly 70-percent of retail tenants committed is a testament to the strength of the Miami market and robust pent-up retail demand.”

The opening of its first group of tenants represents the next phase for the $452 million, 8.14-acre mixed-use project. The sprawling 2.2 million-square-foot development features retail, office, apartments, a landscaped riverwalk, green spaces for enjoyment, cultural events, and boat docks. River Landing, which has injected life into a long-forgotten pocket of Miami, anchors the up-and-coming Mid River District.

“Welcoming the opening of our first retail tenants is the culmination of a process that began nearly a decade ago, when we first contracted with the old Mahi Shrine Auditorium site in 2011,” said Coralee Penabad, Co-Principal of Urban-X Group, the developer behind River Landing. “Over the years, we had to overcome multiple challenges developing and building River Landing so we are thrilled with the end result. From the beginning, we envisioned a vibrant and dynamic development that would unlock the city’s riverfront culture for all of Miami. Even though Miami is surrounded by water, there are very few waterfront places accessible for everyone to enjoy. We are excited to invite and welcome the community to experience Miami’s riverfront while shopping, dining, working, and relaxing at River Landing.”

River Landing will be announcing new tenants in the coming months. The developer is currently negotiating with several restaurants looking to open a waterfront location in 2021, when the economy is expected to normalize. River Landing has incorporated some changes recently such as curbside pick-up spaces for tenants to meet customer demand while promoting social distancing.

“The pandemic slowed down our negotiations with retail restaurant tenants, but as we have a better handle on COVID, retailers now see demand on the rise and are optimistic about 2021,” said Andrew Hellinger Co-Principal of Urban-X Group. “They tell us they want to enter this submarket because they see a pent-up demand for retail and restaurants in one of Miami’s most densely populated areas. We expect to receive two LOIs in the coming weeks and hope to announce new restaurant leases before the end of the year.”

River Landing is located steps away from the Health District, with a daytime population of more than 50,000. Strategically located between downtown Miami and Miami International Airport, River Landing will help meet the growing demand for quality discount retail, grocery, banking, and lifestyle services. It is one of the few retail, office, and residential developments that are accessible by boat in Miami.

By incorporating the Miami River into the project, River Landing will offer shoppers an experience that can’t be replicated by online shopping. The new development offers a large open, outdoor atrium that connects the retail stores and creates a communal space for residents and visitors to enjoy while maintaining social distancing. Its design merges interior and exterior environments, allowing retailers to extend into the riverfront patio and atrium spaces to enhance the overall customer experience.

The mixed-use development consists of approximately 345,000 square feet of retail/commercial space, 135,000 square feet of office, 528 market-rate apartments, more than 2,000 parking spaces and the 25-foot-wide riverwalk. A 25,500-square-foot restaurant raw can be divided into seven concept restaurants, including from fine dining to casual and family-style outlets.

River Landing is accessible by Miami-Dade’s main thoroughfares: Interstate 95 and State Road 836. The complex has proximity to two Metrorail stations and the rapid transit system that connects all the major hospitals and research centers to Downtown Miami, East Kendall and Hialeah as well as the Tri-Rail, a commuter rail line linking Miami, Fort Lauderdale, and West Palm Beach.

River Landing, designed to be a “smart” complex, has a smart garage system that will auto-charge vehicles once they open an account or pay by plate. The system uses touchless pay technology where visitors can use an app on their phones to settle their accounts. River Landing has also partnered with Liquid Outdoor to provide smart-kiosks and digital screens that assist in wayfinding, security, selfie cameras, public safety alerts, and messaging. River Landing will also provide smart lockers for guests and tenants and have folded in ridesharing technology, such as Uber and Lyft into the project.

Leasing for its 528-market rate apartments is scheduled to begin in September 2020 with units available for moving in October 2020. The apartments will be operated and leased by Lantower Residential, a subsidiary of H&R.