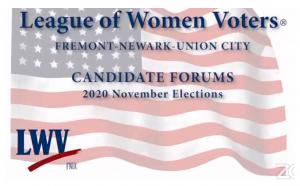 The League of Women Voters of Fremont, Newark, and Union City is a nonpartisan organization that encourages the informed and active participation in government. 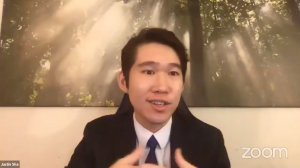 Sales tax and property value tax are pain points for many of our community members who feel like they just keep seeing their taxes go up without seeing any corresponding value.”
— Justin Sha

FREMONT, CA, USA, September 11, 2020 /EINPresswire.com/ — During the evening of Thursday, September 10, 2020, the League of Women Voters of Fremont, Newark, and Union City hosted the quadrennial Fremont Mayoral Forum in a race with six mayoral candidates, a record high for the City of Fremont. The mayoral forum was moderated expertly by attorney David Bonaccorsi, a partner at the law firm Bernard, Balgley & Bonaccorsi and a former Fremont City Councilmember.

This year, the City of Fremont experienced a historic milestone in mayoral elections, where a record number of six candidates are running for the position, in spite of the fact that the incumbent Mayor is running for re-election.

At the League of Women Voters mayoral forum, a variety of topics were discussed, such as housing and the environment.

In response to the evening’s first question, about cohousing communities, at 00:09:40, Justin Sha said, “We need to think about having affordable housing and environmentally conscious housing by design, and that would be my motto as mayor.” He continued, “Self-supportive housing, carbon segregation, buildings as material banks, and the circular economy—because at the end of the day, we also need to support life cycle housing . . . People need options, and even if some of our seniors want to downsize [and look into] a cohousing or village program . . . they can’t.” At 00:58:30, Justin Sha later added that Missing Middle Housing is a big problem and that people can simply not afford the one-million dollar condos that have been going up in places where they should not be going up.

In reference to the Mayor’s 2016 campaign, at 00:09:19, Justin Sha stated, “You know, I am not campaigning on a platform of anti-development. I never have—because I think that would be disingenuous.” At 00:08:34, Justin Sha had prefaced, “The truth is in the middle. We can’t approve all development projects that come our way, but if we don’t have a responsible Council, then the State will start taking over and we won’t have any local control at all.”

Later, at 00:20:11, Moderator Bonaccorsi asked a question about whether Fremont should work to regain local control. The Mayor answered, referencing the Residential Housing Needs Assessment (RHNA) for the 2015-2023 period, “It’s an excellent conversation because so many times the community wonders ‘why do we have to build all these housing’ and not realizing that some of this is outside our control . . . But we need to be thoughtful in our balance, in how we address housing, as many people have commented, and that’s what I originally spoke on when I ran [in 2016].”

At 00:25:01, Justin Sha pushed back, stating that certain Bay Area cities used the guise of local control as an excuse not to build. He continued, “Actually, in 2016, we saw that in the Fremont elections as well, right? You know, without naming names, we have had individuals who have been on City Council [during the RHNA] period of 2015 to 2023.” The Mayor was first elected to Council in 2014.

On generating new revenue streams, at 00:29:50, Justin Sha challenged the city to not always think in terms of raising taxes or cutting costs, “Why can’t we think of new and innovative and creative solutions to get the best bang for our buck?” At 00:31:27, Justin Sha said that sales tax and property value tax are pain points for many community members who feel like they just keep seeing their taxes go up without corresponding value.

On COVID-19 and the Tesla scandal, at 00:42:00, Justin Sha stated that he believes that Fremont did the absolute wrong thing in basically asking Alameda County to relax regulations for Tesla, as illustrated by the positive COVID-19 test results later confirmed in the Tesla factory. (Sources: (1) https://www.pleasantonweekly.com/news/2020/05/10/tesla-ceo-musk-threatens-to-move-plant-out-of-fremont-sue-alameda-county; (2) https://www.mercurynews.com/2020/07/15/tesla-has-more-than-130-employees-who-tested-positive-for-coronavirus-report/)

“We have a housing crisis . . . we have a public safety issue, we have a national health crisis [and] we have an environmental crisis that requires true leadership to address. Talk is cheap, and I’m not a career politician who breaks his campaign promises. I’m running for us, for our community, and for this opportunity to use [this] campaign as a vehicle for the change that you believe in and the change we all want to see . . . We need a leader who does not simply react from one problem to the next but one who thinks big picture and is proactive in making structural process improvements.” Justin Sha concluded, “I am running a positive campaign on the issues, and I see a beautiful future for our city. Let’s actualize our greatest potential as a city and really be proactive in creating the community we want to be.”

Justin Sha has received the endorsement of the Fremont Unified Teachers District Association and the local Democratic Party clubs, including the Tri-Cities Democratic Forum and the South Alameda County Young Democrats.

Justin Sha is running for Mayor of Fremont, CA. Sha is VP of Customer Success at Droisys, a global technology company headquartered in Fremont, and he teaches business law at Ohlone College. Sha is an involved community member, serving on local nonprofit boards. He is the Chairman of Asian American Millennials for American Advancement as well as a member of the Ohlone College Foundation Board. Sha received his B.A. from Dartmouth College and his J.D. from UC Hastings College of the Law.