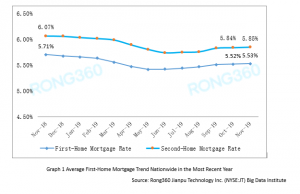 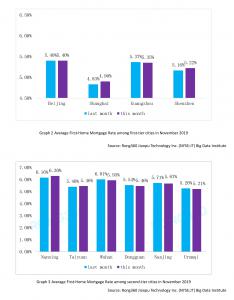 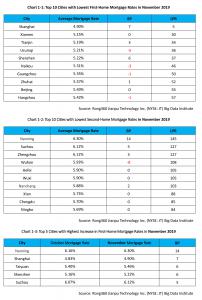 Among the 533 bank branches (sub-branches) in 35 cities monitored by Rong360 Jianpu Technology (NYSE:JT) Big Data Institute, except those halting the offering of residential mortgages, 385 maintained the rates for the first-time homebuyers in last month. The number represented an increase of 178 over last month and accounted for 72.23% of all the monitored bank institutions. Besides, the number of bank institutions posting month-on-month increase or decrease both declined.

4. Trend: LPR cut not to offer much stimulus in short term and mortgage rates largely to remain stable before end-2019
In the fourth offering of LPR on November 20, the five-year LPR was cut for the first time, followed by a heated discussion on whether residential mortgage loan rates would follow suit. Rong360 Jianpu Technology (NYSE:JT) Big Data Institute holds that cities much affected by new regulations before will probably reduce their mortgage rates to weaken the impact of prior upward adjustment of the rates. However, as far as most cities are concerned, what’s brought about by the reform of new LPR mechanism for the moment is only the change in benchmarks, and the actual mortgage rate is mainly subject to local control policies, i.e. how many BPs are added onto the benchmark rates.
In this sense, without a significant change in real estate control policies, it is expected that LPR cut will not immediately affect the rates of new residential mortgages. What’s more, at the end of the year, lots of banks do not have many credit limits left, and the number of banks ceasing to lend will increase further. In light of the above-mentioned factors, most of the cities will roughly keep local mortgage rates stable, free from the LPR stimulus in the short term.