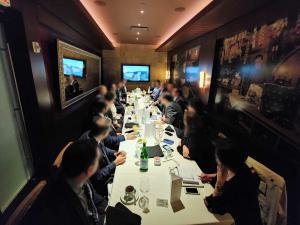 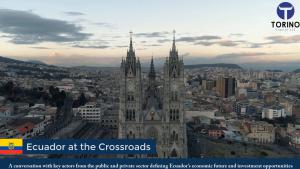 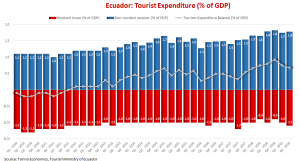 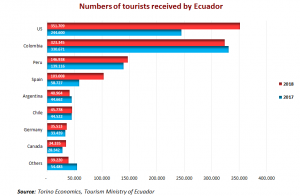 "The message we seek to carry out is the government, and the private sector is united," the Minister said to EFE.”
— Tourism Minister Rosi Prado De Holguín

NEW YORK, NY, UNITED STATES, November 22, 2019 /EINPresswire.com/ — Torino Capital hosted Ecuador at the Crossroads on November 14, where it took place a conversation with the key actors from the public and private sector defining Ecuador's economic future and investment opportunities. Among the guests were the key Ecuadorian businessmen and Ecuadorian Cabinet Minister Rosi Prado de Holguín.

This event was one of some initiatives from the Ecuadorian Government to strengthen the commercial relationship between Ecuador and the USA. The United States is Ecuador's leading trading partner, representing the destination of 31% of exports in 2018.

Such a meeting put together significant US funds investors and some of the wealthiest families in Ecuador, lawyers, and cabinet members of the Ecuadorian Government to discuss some strategic points regarding Ecuador's economic future. On the one hand, the Ecuadorian entourage showed their perspective, agreements, and goals to make the country succeed, on the other hand, the investors had a unique opportunity to present their concerns, suggestions, and thoughts regarding their vision in Ecuador's market position. "The message we seek to carry out is the government and the private sector are united," the Minister said to Efe.

Torino Capital is genuinely interested in Ecuador’s economic scenario due to new investment opportunities which never happened before in the Andean country. Torino has carefully watched the Ecuadorian government's efforts to bring new investors to the country and improve its economy.

Ecuador’s economy faces a set of challenges that test the capacity of public policymakers to make it possible for the South American country to find alternative sources of income from those of the oil activity. With a level of gross debt as a percentage of GDP that has increased since 2010, the resources allocated to investment in productive and social infrastructure are increasingly scarce.

During the Administration of Rafael Correa (2007-2017), Ecuador's external debt went from 27.2% to 44.6% as a percentage of GDP. Although this debt does not reach 50%, there was an increase in the financing needs of the Ecuadorian economy that, as estimated in the 2019-2022 Four-Year Budget Programming of the Ministry of Economic and Finance of Ecuador, reach an amount of USD 25,070 m.

This situation has led Ecuador, in March 2019, to ask for financial assistance from the International Monetary Fund (IMF), in search of the necessary financing to solve the shortage of dollars in its economy and undertake a state modernization program. Under the IMF financing program, the Lenin Moreno government has implemented a fiscal consolidation strategy, which until now has not found approval by parliament, after two opportunities. Although the IMF has expressed its support for Ecuador, as well as its willingness to make its conditions more flexible in order to guarantee its political viability, the complex political and social environment, as well as the lack of will from the parliament to approve the required structural reforms, have been a significant obstacle for the Moreno Administration.

In December, an IMF Executive Board meeting will take place, in which the issue of Ecuador could be addressed. However, if the parliament rejects the tax reform again or its approval presents a delay, the next disbursement, planned at USD 500 mn, could be committed. It is important to note that the first policies implemented in the framework of the IMF financing program, such as the removal of gasoline subsidies, found a social rejection that put political governance at stake in Ecuador. This situation led President Moreno to abandon this measure, on October 13, 2019, initiating a dialogue process with the social sectors that raised their voice of protest.

The facts described leads to the need to explore alternative sources of income, which allow increasing the room for maneuver of the Ecuador government to effectively meet the enormous social demands of its population.

As an alternative source of fiscal income, the tourism sector in Ecuador has made significant progress in recent years as a result of the implementation of a set of public policies that have contributed to generate the appropriate incentives to achieve its sustained growth. Today, tourism activity in Ecuador represents one of the largest sources of non-oil income, after shrimp and bananas. According to data provided by the Ministry of Tourism of Ecuador, 2 out of every 100 dollars produced in this country. Although it still does not represent a significant contribution, it is essential to note its sustained increase in its participation in total productive activity in recent years.

It is crucial to give continuity to the set of public policies that have taken place from the tax area, as well as to promote the country's brand strategy. Also, within the receptive tourism strategy, it is important for the authorities to stimulate the reception of new airlines, for the increase of Ecuador's connectivity with the rest of the world.

The successful Costa Rican model is based on the harmonious integration between the ecosystem and the hotel infrastructure. Likewise, the development of the sector is supported by an innovative Certification System, which guarantees the standardization of the quality of the tourist service throughout the country. Its innovation characterizes this System, both of the processes and the products offered, taking into account a constant interaction with the client through evaluation instruments.

Tourism, as an economic activity, contributes 6.3% of Costa Rica's GDP, representing the highest level of income within the services sector. Meanwhile, Ecuador records a contribution to GDP close to 2%.

Ecuador has a vibrant natural ecosystem, which includes destinations as exotic as the Galapagos Islands, or of remarkable historical and cultural importance, such as Quito. Innovation emerges as a factor of high relevance to improve tourism processes and products that Ecuador could offer to the world.