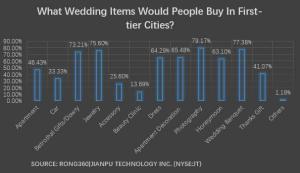 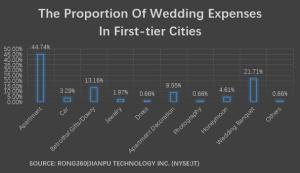 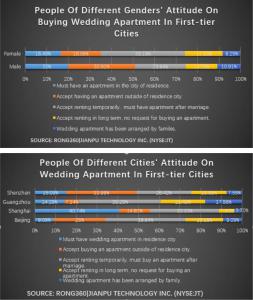 BEIJING, CHINA, November 4, 2019 /EINPresswire.com/ — "It's so difficult. The thought of buying a wedding apartment in Beijing makes my head ache." After five years of drifting through life in Beijing China, Li has finally gotten used to the fast pace of the city.

"I have been with my girlfriend for nearly four years and we want to settle down in Beijing. I've always wanted to get married, but her family has asked me to buy an apartment in Beijing before the wedding. The cost is far too high for me."

Indeed, it is not easy for Chinese young people who have just achieved financial independence to bear the heavy burden of marriage. In China, most couples prefer to buy a home and a car before the wedding, which is widely considered to be the duty of the groom and his family.

In first-tier cities like Beijing, Shanghai, Shenzhen and Guangzhou, high housing prices discourage many young people from getting married. Apart from real estate assets, there are many other expenses to consider. Among such expenses are the dowry, wedding ring, wedding banquet, honeymoon and wedding photography…every item is costly.

According to a recent survey by Rong360 Jianpu Technology Inc. (NYSE:JT), 47.39 percent of respondents' wedding expenditures were above 200,000 RMB ($28,300), which is over the three times the per capita disposable income of first-tier cities.

On the other hand, only 1.42 percent of respondents supported "bare marriage," which implies a marriage without all the expensive wedding procedures and assets bases.

For marriageable people in first-tier cities, what is a must-have for marriage? The survey found that wedding photography was the top reply from newly married couples. 79.17 percent of respondents thought wedding photography to be a necessary expense. More than 70 percent of respondents also considered wedding banquets, wedding jewelry and dowries to be must-have additions.

According to the survey, 46.43 percent of people believed buying a home was necessary before the wedding and 33.33 percent thought it necessary to have a car.

"Even in another 30 years, I will still be able to remember sitting on the back of a real estate agent's motorcycle in Beijing in late November, looking for a room to rent and shivering in the cold wind."

For different generations, consumption concepts are different. In the eyes of the post-60s and post-70s age groups, wedding banquets and dowries were suggested as the most important expenses for weddings, followed by wedding jewelry and wedding photography. Only 12.5 percent of respondents thought buying a house was a necessary expense for marriage.

Although nearly half of the respondents thought they needed to buy an apartment before getting married, the proportion of people who wanted to buy property in first-tier cites was low due to the high housing prices in such cities.

Despite the high housing prices in the four first-tier cities, residents of other cities hold different views on buying a house marriage due to their differing geographical surroundings.

Miss Gao, who has worked in Shanghai for many years, was introduced to her boyfriend the year before last. They had already met each other’s parents.

"In fact, a lot of friends' parents would have the same requirement. If you cannot afford [to buy a home] downtown, then to go to the suburbs. We just saw a small two-bed unit in the suburbs. The down-payment for the unit was more than 800,000 RMB ($113,242). We will bite the bullet and settle down there."

In contrast, only 7.41 percent of Shanghai's respondents agreed with the compromise of long-term renting, while 18.18 percent agreed in Beijing, 21.43 percent in Guangzhou and 16.98 percent in Shenzhen.