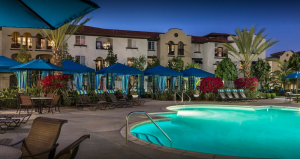 CALABASAS, CALIFORNIA, USA, June 6, 2019 /EINPresswire.com/ — Griffin Living, which develops and operates senior living communities across the country, has recently earned multiple awards from the National Association of Home Builders (NAHB) for a variety of projects.

Griffin Living’s VivaBella Simi Valley, an assisted living and memory care community currently under construction in Simi Valley, California, earned the NAHB’s Best 55+ Assisted Living or Special Needs Community on the Boards Gold/Innovation award. VivaBella Simi Valley marks a breakthrough in senior living design, as it is a senior living community located within a shopping center. This gives seniors walking access to a brand new grocery store, a pharmacy, restaurants, a variety of shops, as well as shaded grassy common areas lined with fountains and benches. Paul Griffin III, President and CEO of Griffin Living, explains, “The convenience of the shopping area for residents and their visitors is what’s drawing more people to want this option for their aging loved ones.”

The Georgian Lakeside in Roswell, Georgia, developed by Griffin Living, earned a spot on the NAHB Best of 55+ Housing Awards, earning a silver medal in design. The Georgian Lakeside, located just north of Atlanta, is a senior living community offering assisted living and memory care. Situated on a 3 acre site and consisting of 95 units of assisted living and memory care, the project is now owned by Harrison Street Real Estate Advisors and managed by Thrive Senior Living.

The award-winning track record of Griffin Living is a result of the family-run company’s hard work and creativity. The firm, formerly known as Griffin Fine Living, is led by president and CEO Paul Griffin III, a fifth-generation homebuilder with over 40 years of experience. Paul is an award winner himself, earning the NAHB Home Builder of the Year award in 1997 and the Habitat for Humanity Builder of the Year award in 2000. Under Paul’s leadership, Griffin looks ahead to many more award-winning projects across the country.

Griffin Living is headquartered in Calabasas, California and has offices in Atlanta, Georgia. It currently has projects in various stages of development and operation in California, Connecticut, Florida, and Georgia and is actively exploring opportunities in new regional markets.